Here are some “hints and kinks” for the advanced C-Programmer. You might encounter some task from university courses. It is not a good idea just to copy. Your lecturer might ask some additional questions.

“Recursion” means that a function calls itself for a certain amount of repetitions. This is an elegant way for solving some special problems. Whenever you might consider that a function could be used repeatedly you should take that into account. But, never to be forgotten, a “halt” criteria must be implemented. Otherwise the loop will run infinitely and stack pointer will crash sooner or later.

The “bail out” criteria here is that the value handed over to the next recursion always is diminished by 1 each time the function is called. As soon as it reaches 0 the recursed functions are quit one after another until control is handed over again to main().

The function calls itself by multiplying the parameter x (just handed over) with x – 1. Thus the “loop” (not a real “loop” by the way) runs from the start (x) down to 0. After this the program returns to main(). If 0 is handed over, return value 1 is returned instantly.

Calling a function by reference

A function can not only be called by its name but also by its address in memory. Here is an example. The function power2() calculates the square value of a parameter handed over and returns that square value.

Some remarks on strings

Strings in C are somehow “special” when you’re coming from another programming language like BASIC, PASCAL or so. Strings in C are just some memory cells sequenced and terminated by a 0 (zero) content. The string “ABC” for example looks like this in the memory a processor handles:

There are several ways to declare a string. The result will be the same, the handling will differ to a certain degree. First you can declare a string using 2 different methods:

For the latter method you have not declared a string but a pointer, where this string starts in memory. The expression *s is an address. What you have NOT is done is to reserve memory for this string. It can be achieved by allocating memory

This memory allocation will reserve 100 Bytes starting at the memory address *s points to. The expression (char*) as a so-called “cast” operator is used to define the data type correctly. Some compilers need it, others don’t.

There are also several ways to assign a value (i. e. a content) to a string. First is by initialization:

[] leaves the counting of the bytes and memory allocation  to the compiler, [25] to the software developer.

Not a good idea is doing this:

The memory space reserved will not be suffice to store the whole string, other variables might be overwritten.

Defining a string on runtime

After the string variables have been initialized (or not), on runtime handling strings requires a different technique. xstr = “Hello world” does not work in C as xstr is not a string but the memory address of the first byte of the string. You have to use string functions. They are declared in <string.h> and defined in the respective library.

strcpy() is a very simple function. Using a new name to not interfere with the “built in” C function we can imagine this as

Please note that the function has no return value. The memory address of string d (for “destination”) is handed over and changing the string’s bytes takes place according to this start address of the string in memory. The copying runs as long as 0 (zero) value is not encountered. The “++” operator increases respective memory address by 1 each time the loop is repeated. Another alternative for implementing this function could be:

which does the same but on a different approach.

For a compact string bytes setting you can use direct access as well:

It should always be terminated by a zero value because you never know if the sting has been initialized correctly.

This will prevent unwanted surprise…

Base64 is a method of encoding byte-sized binary (0..255) to a 6-bit pattern using only letters (A..Z, a..z), numbers (0..9) and 2 extra characters (+,/). The purpose is to be able to transfer binary data via SMTP message protocol which only supports 7-bit data width only. The relation between original data and Base64-codes data is:

Each3 bytes of input data are transformed into 4 bytes of Base64-data.

A C-function to do this can look like this:

Two string pointers are used. One for the destination and one for the source. The function call is:

where p is a pointer to an array of bytes for the destination.

And this is the corresponding decoder function:

This C code generates a respective series up to a limit fn. Parameter fn must be <100, no error check included!

In coding interviews this is a popular question: “How can you swap 2 variables without using a temporay variable?”

The problem can be solved by “encoding” one variable into the other and recoding it later. This done by using the XOR link: 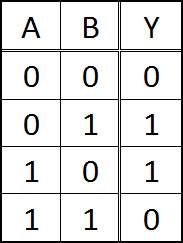